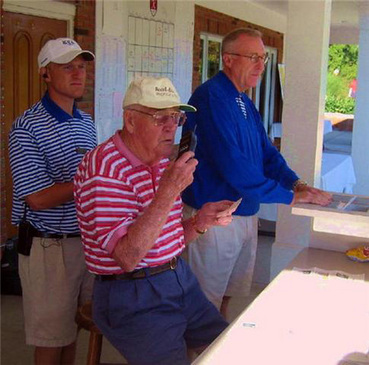 Passed peacefully Wednesday December 17, 2014 at the age of 97. Harry was born July 13, 1917 in Luke, Maryland a son of William Batchelor and Jane May (Mole) Rapley. During WWII, he served with the U.S. Navy.

Harry was a lifelong Kalamazoo area resident and was employed with the Shakespeare Company for 44 years, retiring in 1982. He also served the community with Rotary International, St. Luke's Episcopal Church, KCC, and K College. Harry was preceded in death by his parents, his wife of 60 years, Jane E. (Meyer) Rapley who died on April 28, 2000; a brother, William "Bill" B. Rapley Jr.; and a sister, Elinor Reed. He is survived by 3 children, Billie Jane Boyle, of New Smyrna Beach, FL, William H. "Buck" (Mary "Lonnie") Rapley Jr. of Surprise, AZ, and Bobbi Nell Ellini of Kalamazoo; 4 grandchildren; 5 great-grandsons; and several nieces and nephews.

Harry Rapley has served as the official starter for the Kalamazoo Country Club Invitational since 1965. His voice, sense of humor and charm have been a steady presence at the annual tournament for almost 50 years.  "He is the Golden Throat of our Invitational" says KCC PGA Golf Professional Dick Stewart.

In his middle 90's Harry's golfing days are behind him after hanging up the sticks at the age of 91.  KCC broadcaster and longtime friend, Joe Spoerl assists with his duties but Harry is certainly not ready to completely give up his microphone or his chair near the first tee just yet.

"I never had the game to actually play in the tournament," said Rapley, a multi-sport star at K-College in the late 1930s who racked up 12 varsity letters -- none in golf.  He was a reserve quarterback for the MIAA champion Hornets in 1938 and also picked up conference titles in the two-mile and mile for the track team.  "There weren't too many people in school at that time, so that might have helped," he quipped.

His streak as the event's official starter has been nearly perfect since 1965. Rapley missed only three tournaments from 1968-71 when his job as a salesman for Shakespeare, a company specializing in outdoors equipment, took him to South Carolina.  Incidentally, that job helped him strike up a friendship with golf legend Gary Player who sponsored the Shakespeare Wonder Club (Same make as Tom Sielatycki's fathers 6 iron).

"I've enjoyed reading the names ... like Davis Love III and Camilo Villegas" said Rapley, who "soups up" the information provided by players when they apply with a heavy seasoning of his own personality. "There's a little ham in all of us."