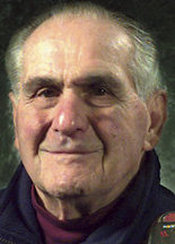 Vic Cuiss helped usher in a golden era in men’s golf at Albion as an integral member of the 1950 and 1951 MIAA championship teams. He received the Britons’ most valuable player award when he boosted the team to the 1950 title by posting the team’s low score–153–in the MIAA tournament at Kalamazoo. He served as team captain in 1951.

The Britons went on to hold at least a share of the league title through 1956.

Vic’s path to Albion was not traditional, by any means, as he graduated from Jackson Junior College in 1939 before serving in the Army Air Corps during World War II. He returned to Jackson in 1945 and went to work before resuming his education at Albion.

Involved in the community, Vic served on the governing boards of the Jackson Kiwanis Club, Jackson County Parks and Recreation Commission, and Sharp Park. He was a longtime high school basketball and football official and the director of officials for the Western Conference of the Michigan Community College Athletic Association.

Vic continued to be active on the course as he served as chairman of the Michigan Amateur Committee from 1974 to 1986 and was chosen to serve as president of the Golf Association of Michigan in 1987-88. The Vic Cuiss Cup is the trophy awarded by the Jackson Masters Golf Championship. Vic passed away April 17, 2013, at age 94.