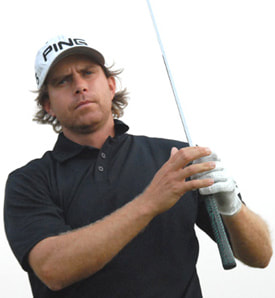 College Team (Past, Present, or Future)

Short Biography of YOU?
On the USPGA TOUR in 1997 Gabriel broke through for his first tournament victory
as golf professional late in the year in the B.C. Open played in Endicott, New York.
This victory marked the first time a Swedish golfer had won on the US PGA TOUR.

In February 1999, Gabriel recorded his second victory on the PGA TOUR in
the Touchstone Energy Tucson Open played in Tucson, Arizona.
The victory came after Gabriel birdied the first play-off hole to beat Tommy Armour III.

Favorite thing about the KCC Invitational? If it's your first time, what are you looking forward to the most?